A team of Special Air Service soldiers who were surrounded by Taliban hordes in Kandahar have been rescued in a dramatic desert operation.

Around 20 elite SAS troops were left stranded in the province hundreds of miles from friendly forces when the militants took over. 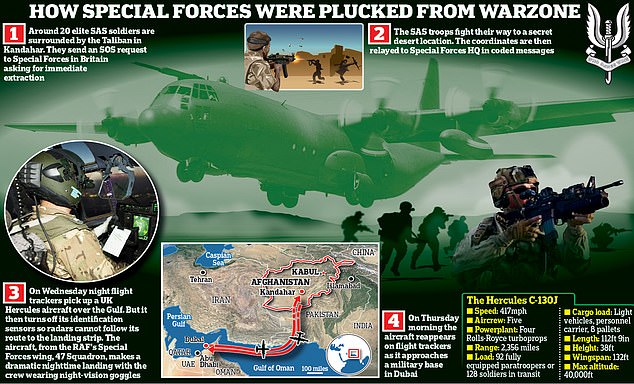 As enemy fighters closed in they sent an SOS request to Special Forces bosses back in Britain calling for immediate extraction.

Meanwhile, RAF chiefs planning the evacuation of British nationals and entitled Afghans from Kabul airport, had to find a transport aircraft capable of landing and taking off again in the desert.

On Wednesday night online flight trackers picked up a UK Hercules transport aircraft flying over the Gulf, until it turned off its Identification Friend or Foe sensors. This ensured flight radars could not follow its route towards the area of desert scrub which SAS troops had identified as a possible landing strip.

The aircraft, from the RAF’s Special Forces wing, made a dramatic landing in the dead of night with the crew wearing digital night-vision goggles.

A source said: ‘It was a very hush, hush mission. Kandahar had fallen to the Taliban on Friday and the guys were down there for five days after that. The enemy were rampant and killing a lot of Afghan Special Forces whom the SAS had been working with. So it was a very urgent mission.

How Biden almost got British SAS squad KILLED: President’s disastrous withdrawal left elite soldiers stranded hundreds of miles from safety… until a dramatic desert rescue in the dead of night saved them from Talibanhttps://t.co/sCN5439dJj